20% Off Your First Order

By signing up to our newsletter, we will send you updates on new products, exclusive offers and out of stock notifications.

Complimentary Delivery With Every Order

Our Myrrh & Tonka luxury scented reed diffuser gives you warm powdery indulgence with the earthy, smokey tonka bean with a slight hint of lavender and almond. A well balanced oriental with a velvety amber base. Imagine being part of a sensual enveloping hug. This is where this fragrances takes you. Transform your home with confidence.

No hassle returns. Please contact info@edwardgeorgelondon.com within 30 days of receiving your order. All return postage must be paid by the buyer.

We can exchange or refund products if:

As the parcel remains your responsibility until it arrives back with us, ensure that you get proof of postage in case you need to contact us about your return. All return costs are the responsibility of the buyer.

If you would like to start an exchange or return please email us with your order id at: info@edwardgeorgelondon.com

this is a set of reed diffuser with a very nice gift packaging, it’s ready to send as a gift to someone who love to use reed diffuser

the product design is in all black, every items inside are in black colour, very consistent tone, a very luxurious feel

the bottle is very thick and heavy (500g), not so sure how much perfume in the bottle as i read through all product description and packaging, it didn’t mention the actual volume, i guess it’s around 100ml or less for the thickness and size of the bottle

i used it in a closed room of around 15 square meters, i couldn’t say it’s strong, i could hardly smell anything if not sitting next to it, probably myrrh and tonka are mild in their scent, but in fact the mixed up scent is very nice, i like it very much, i hope it’s strong enough so i don’t need to sniff it intentionally

all in all, i’m satisfied with this product 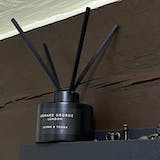 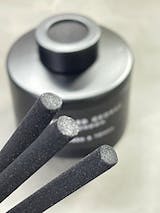 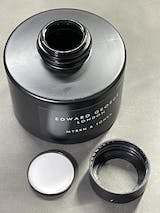 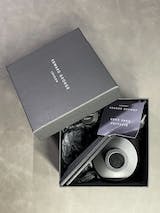 Wow! I rarely leave reviews but i had to for this company! Love the reed diffuser feels so luxurious and classy all black. Even the reed sticks are nice and thick. I got the Myrrh & Tonka scent and it smell exactly the same as my Jo Malone Myrrh & Tonka candle! Absolutely love! Will definitely keep supporting this company! Keep it up :)

This is a gorgeous looking diffuser it comes beautifully presented in a nice box with 10 reds and 2 sample scented waxes. Myrhh and Tonka is my favourite scent so I was looking forward to trying this. I firstly put it in my bedroom with 5 reeds but could only really smell it when I was close to it however after I put another couple of reeds in my room as the most gorgeous scent when I walk into it. This is absolutely gorgeous sitting on my shelf but would also make a lovely gift for someone. Although I will be ordering another one for myself when this is done.

B
BCB & More
Lovely smell but too pricey

I understand that price can be higher when dealing with smaller independant brands and that they have higher costs etc, but I am afraid I cannot justify the cost of this product. The scent is lovely (but certainly not an original), the packaging nice and classy, and overall packed nicely etc. However this price point is just not justifiable in my opinion.

I have quite a few reed diffusers and they all share one thing in my opinion - they are marketed primarily towards women.
This set seems to buck that trend.

Firstly the packaging and the set itself: all black, very classy. No plastic - a huge up-tick!
The outer box is rigid cardboard - the kind of box that I'm reluctant to chuck out as its sure to be useful for something!
The contents are nestled in tissue paper.

The bottle is short and squat and the first thing that's apparent - its easy to open and doesn't have a tight fitting inner plastic cork, rather an inner lid which is easy to remove, so less danger of spilling the liquid whilst setting it up.
It comes with 10 reeds, and these a are thicker and more substantial than the usual ones.
Also included in the box are 2 small tins of solid perfume, a nice surprise.
So far I'm very impressed.

I ordered the fragrance 'Myrrh and Tonka, Strong'.

After setting it up with 6 reeds it didn't take long for the fragrance to permeate the room. It IS strong.
Its a rather woody masculine scent - not unpleasant, and it doesn't smell like canned air-freshener - one of my major gripes with many of the diffusers I have sampled.
The bonus solid perfumes are 'myrrh and tonka' plus 'bergamot and geranium'. I'm rather a fan of solid perfumes and I quite like the bergamot/geranium combination.
So, I think it's a very nice set, it looks classy and understated and is all about the fragrance, without pretensions of being an ornament.

The down side for me is that I don't particularly like the myrrh and tonka fragrance that I chose - not because its awful, its not, rather its just simply not to my liking.
Its earthy, woody and in my opinion quite masculine and I prefer citrusy/florals scents. The amber notes are quite strong and the florals less so. Its described as 'oriental' and I'm not sure I would agree, however a huge compliment - its still in my living room and hasn't been relegated to the porch with the dog coats and wellies, which is where reed diffusers go to see out their days!

I like the bergamot /geranium in the solid perfume, so would probably like it in a diffuser too.

Theres no mention anywhere of what is actually in the liquid itself, so whether it's natural or synthetic fragrances is impossible to know, but I will say that if the fragrances are synthetic, at least it doesn't smell like a burst from an aerosol can.

I will have to tone it down and remove a couple of the reeds, but so far I'm OK with it being in the living room.
I would be keen to sample other scents in the range, but at £30 its a luxury that is not at the top of my priorities.
Having said that, its a very classy looking set, well presented, well packaged, no plastic anywhere and would make a lovely gift.
I'm giving it 4 stars - I have yet to find a reed diffuser that I would award 5 stars, but its possibly somewhere in this range.